As a highlight of its 150th anniversary, the Metropolitan Museum of Art has opened newly redesigned British Galleries. The ten new galleries offer a fresh perspective of the museum’s collection of British art with a chronological narrative through 400 years of decorative arts, design, and sculpture. The new galleries, designed by Roman and Williams, showcase nearly 700 works, dating from between 1500 to 1900. With extensive experience in museum lighting for renowned institutions around the world, L’Observatoire International was commissioned to design the full lighting scope for all new spaces, including ambient, accent lighting for the collection, all integral vitrine lighting, and lighting for three historic period rooms.

The lighting for the new galleries balances old and new. The design follows the galleries’ linear chronology with a curated narrative that maintains a reference to period-specific lighting levels, while working to enhance the individual works on display. Visitors begin in the 16th-century gallery, which has a darker and more dramatic atmosphere with higher contrast lighting in reference to candlelight as the primary source of illumination during this period. As they continue on through the adjacent galleries, museumgoers will experience a gradual transition to lighter spaces, eventually reaching the 19th-century gallery, which features brighter lighting levels.

The individual works are lit through accent lighting, while ambient light is provided by uplighting. Throughout the galleries, ceiling-mounted rigs are used as a structure for track heads to provide accent lighting, allowing flexibility and cross lighting without casting sharp shadows. In the 18th- and 19th-century galleries, the same rigs are also used to provide uplighting.

To showcase The Met’s extensive and varied collection of British works, some individualized lighting schemes were necessary. In the restored Cassiobury Staircase in the 17thcentury galleries, intricate hand carved details are amplified by accent lighting, while the museum’s collection of tapestries is lit with a wash of uniform lighting, bringing alive their rich color palette.

In close conversation with the curators and gallery designers, L’Observatoire International alsodesigned a range of customized lighting elements. Throughout the galleries, case lighting offers full flexibility between fully diffused downlighting and accent lighting. Through a series of mock-ups and prototypes, vitrines were customized with integrated lighting to provide a generous soft glow through concealed illumination. The wall recessed glass cases are outfitted with an LED panel at the top, concealed by a louver.

In the Tea and Trade gallery, which highlights the museum’s collection of 100 teapots, a customized display case features LED panels integrated into the vertical elements, which helps render the three-dimensionality of the objects. They are simultaneously each illuminated by ceiling-mounted lighting, celebrating the playful patterns of their cast shadows.

As fully designed historic environments, the three historic period rooms posed the unique challenge of needing atmospheric lighting without being able to visibly introduce new light sources. Miniature LED accent lights were instead carefully integrated into the historic chandeliers showcased in the rooms to provide subtle uplighting and to augment the wall-hung works. In addition, windows were outfitted with concealed fixtures to mimic daylight coming into the room.

L'Observatoire International previously designed the façade lighting for the Metropolitan Museum of Art. They have also worked with institutions such as the Louvre, Musée des Arts Décoratifs, Fondation Louis Vuitton, and the Art Gallery of Ontario. 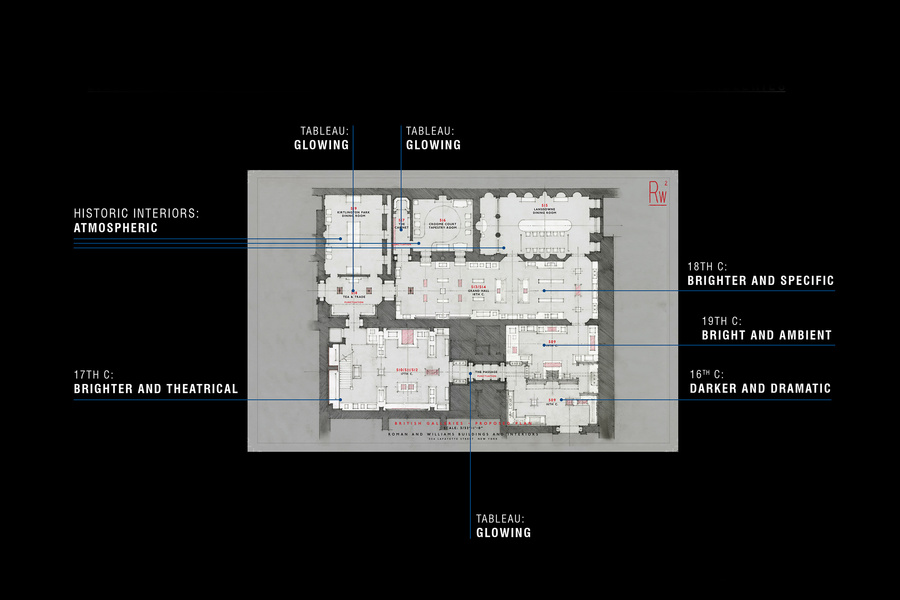