Make it right - The Pink Project

Lighting installation for the Pink Project, the inaugural event to kick off fundraising for the redevelopment of the 9th Ward in New Orleans following the devastation of Hurricane Katrina.

When Brad Pitt visited New Orleans’ Lower 9th Ward two years after Hurricane Katrina, he was shocked by the lack of rebuilding progress in this historic, working class community. Many worried the plight of the neighborhood would be forgotten. In a bold move, Pitt committed to help rebuild in the hardest hit area of the city.

Pitt believed that if we could build safe, sustainable homes in the most devastated part of New Orleans, we would prove that high-quality, green housing could be built affordably everywhere. Led by GRAFT architects, the organization convened 21 world-renowned architects to design climate-adapted, eco-friendly homes, informed by William McDonough’s Cradle to Cradle design principles.

Over the course of many months, Pitt and the architects, who volunteered their time and work, met with Lower 9th Ward homeowners and community leaders to talk about their rebuilding needs and collaborate on home designs. Make It Right kicked off initial fundraising efforts with the Pink Project in December 2007 and broke ground on the first homes with President Clinton and the Clinton Global Initiative in March 2008. Construction began in June 2008 and the first six homes were completed in August 2008.

When Hervé Descottes was asked to be the lighting designer on the Pink Project in New Orleans he saw it as a way to contribute and aid in some way, in the rebuilding of this community. L’Observatoire International was pleased to have been a part of the team and to be in the position to help in providing the skill and resources necessary in this fundraising event.

Provided research and technical information on fixture type. L’Observatoire implemented, fine-tuned and provided instruction on maintenance of the lights for the duration of the project.

The concept for the distribution of the tea lights was based on the Sky map: star constellation of August 26th 2005, at the time of Katrina.

The concept for the pink structures’ lighting consisted of having the structures back-lit, creating dramatic shadow plays which outlined the shapes, as the weeks advanced, these linear flood lights would be placed inside the structures, providing the glow within each house. The increasing number of glowing houses would reflect the amount of funds raised throughout the project. 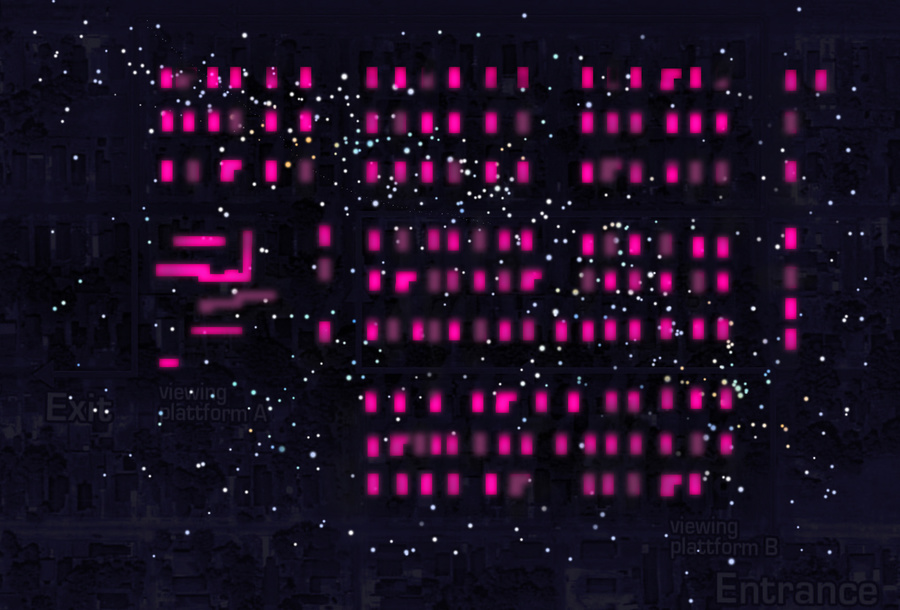